Log in
Home / Holidays / Shabbos- the Eternal Source of Strength 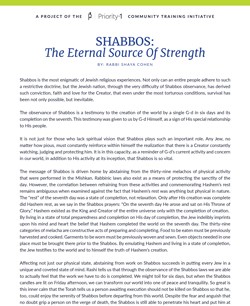 Shabbos is the most enigmatic of Jewish religious experiences. Not only can an entire people adhere to such a restrictive doctrine, but the Jewish nation, through the very difficulty of Shabbos observance, has derived such conviction, faith and love for the Creator, that even under the most torturous conditions, survival has been not only possible, but inevitable.

The observance of Shabbos is a testimony to the creation of the world by a single G-d in six days and its completion on the seventh. This testimony was given to us by G-d Himself, as a sign of His special relationship to His people.

It is not just for those who lack spiritual vision that Shabbos plays such an important role. Any Jew, no matter how pious, must constantly reinforce within himself the realization that there is a Creator constantly watching, judging and protecting him. It is in this capacity, as a reminder of G-d’s current activity and concern in our world, in addition to His activity at its inception, that Shabbos is so vital.

The message of Shabbos is driven home by abstaining from the thirty-nine melachos of physical activity that were performed in the Mishkan. Rabbinic laws also exist as a means of protecting the sanctity of the day. However, the correlation between refraining from these activities and commemorating Hashem’s rest remains ambiguous when examined against the fact that Hashem’s rest was anything but physical in nature. The “rest” of the seventh day was a state of completion, not relaxation. Only after His creation was complete did Hashem rest, as we say in the Shabbos prayers: “On the seventh day He arose and sat on His Throne of Glory.” Hashem existed as the King and Creator of the entire universe only with the completion of creation.

By living in a state of total preparedness and completion on His day of completion, the Jew indelibly imprints upon his mind and heart the belief that Hashem completed the world on the seventh day. The thirty-nine categories of melacha are constructive acts of preparing and completing. Food to be eaten must be previously harvested and cooked. Garments to be worn must be previously woven and sewn. Even objects needed in one place must be brought there prior to the Shabbos. By emulating Hashem and living in a state of completion, the Jew testifies to the world and to himself the truth of Hashem’s creation.

Affecting not just our physical state, abstaining from work on Shabbos succeeds in putting every Jew in a unique and coveted state of mind. Rashi tells us that through the observance of the Shabbos laws we are able to actually feel that the work we have to do is completed. We might toil for six days, but when the Shabbos candles are lit on Friday afternoon, we can transform our world into one of peace and tranquility. So great is this inner calm that the Torah tells us a person awaiting execution should not be killed on Shabbos so that he, too, could enjoy the serenity of Shabbos before departing from this world. Despite the fear and anguish that no doubt grip a person on the verge of death, the Shabbos is still able to penetrate his heart and put him at ease during his final day on earth. It is in this special state of both physical and mental “rest” that all Jews have the potential to go far beyond their previously conceived spiritual capabilities.

The real deterrent to spiritual growth on the part of any sincere Jew is the clouding of the mind by the mundane, albeit important, activities of the week. It is only on Shabbos, when no worldly interference is allowed to enter our thoughts, that we are able to expend all our energies on spiritual pursuits. This is why Shabbos has been designated as a day for increased Torah learning and spiritual growth. In fact, the Jew actually lives the greatest lesson of Bitachon when he stops pursuing his livelihood on Shabbos. What greater way to demonstrate his belief that all is from Hashem than by abandoning his livelihood for a full day. It’s no wonder that so many Jews anxiously, almost desperately, await the Shabbos, so that they may once again serve G-d with a joy and vibrancy that could not possibly exist during the rest of the week.

This point is vividly illustrated by the following story:

A wealthy German official would often visit the residents of his community to maintain his popularity among the townspeople. One Friday night, he came to the home of a destitute Jewish family, their tattered clothes and meager meal bearing witness to their desperate situation. The official, expecting the mood of Shabbos to be somber at best, was privileged instead to see a family filled with joy and exuberance befitting the most royal of households. When he heard the old father, so weak after six days of fruitless labor, sing the Shabbos zemiros with a kind of love and dedication he had never seen before, he was inspired to offer this old man anything he wanted. In response, the old man paused suddenly from singing his beloved song, Menucha V’Simcha, and asked the officer if he would straighten out a bent candle that threatened to blow out early and disturb the peace and light of the Shabbos meal.

Within the old man’s grasp was the opportunity to alleviate all his pain and suffering but it was incomprehensible to him that anything was lacking in his world of totality and serenity on Shabbos. The only thing to be rectified was the bent candle that he was forbidden by the laws of Shabbos to move; a bent candle which 8 might disturb his tranquility by burning out too early.

Originally written by a famous poet, this story demonstrates the extent by which one can feel the serenity of Shabbos. Even as we face hardship and uncertainty during the week, on Shabbos we can experience such completeness that all we can ask for is more Shabbos. Of course, this poet did not know that even asking a non-Jew to fix a bent candle is forbidden by the laws of Shabbos, but the message of the story is still true: observing Shabbos has the ability to put us in a unique state of mind. It is a state of mind that has us feeling that our lives lack absolutely nothing and longing for that feeling not to end.

Inspiration to your Inbox!